I’ve almost been married to my second husband, Jackson, for four years now. Wow, that was fast. 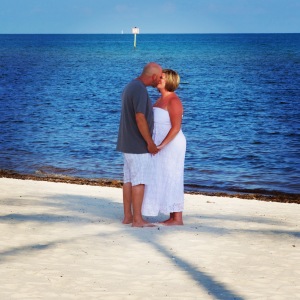 I have three children with my first husband, two girls and one boy. The girls will turn 26 and 24 in less than two weeks, and my son is 19. I also have a stepdaughter, 21, and a stepson, 13.

My first daughter, Jerrica, just had her first daughter, Layla Lorraine, making me a grandmother. Layla is now 17 days old, but she was born nine weeks—two months—early. Today, she weighed in at 3 pounds, 11 ounces. (She’s growing—hooray!—and I’m a grandma—what?!)

My second daughter, Natalie, gets married in 3 months and 21 days. And I have at least 20 pounds to lose before that—yikes.

My third child, Connor, will start his second year of college in the fall, continuing his study of computer science. My mom would be so proud of that. She was a computer programmer/analyst for several years, but I don’t know the number.

I spent my first day of summer vacation (today) pondering—for almost seven hours, it seemed—what I should do for the remaining 80 days (they will go by so so quickly, I’m sure). Last summer, I finished writing my first book, but I don’t know if I have a second one in me or not. (Have any ideas?) Then again, I can’t consider myself a writer if I don’t write, right? So maybe that is exactly what I should spend a portion of the next 80 days doing. Or maybe I’ll blog every day for those 80 days. That sounds like an amazing challenge. Hey, maybe I’ll do both.

By the way, my book, Permanent Marker: A Memoir, has been out 11 weeks and 2 days now, and Jackson still hasn’t gotten his tattoo to honor the book yet. Even though he already has 8—I mean, what’s one more? And what’s the hold up, man?

My father found three ripe strawberries in my garden patch last evening. He’s 81 years old, a retired teacher (32 years), and a brand new great grandfather, a title he tells everyone (if the chance arises). Dad’s been working on the garden for probably three weeks now—maybe longer—I lost track. There are cabbages and corn and onions and tomatoes and cucumbers planted so far, and today, while I was mulling over my summer, I potted 3 pepper plants for my hubby.

Jackson just headed out to grill two huge ribeye steaks for our dinner, but guess what? Surprise! We have zero propane. I hate when that happens. So. Looks like turkey sandwiches it is.

Followed by a glass or 2 of chardonnay and 3 1/2 hours of TV/social media time in my favorite rocking chair. I need rest after all.

Because tomorrow is day #1.